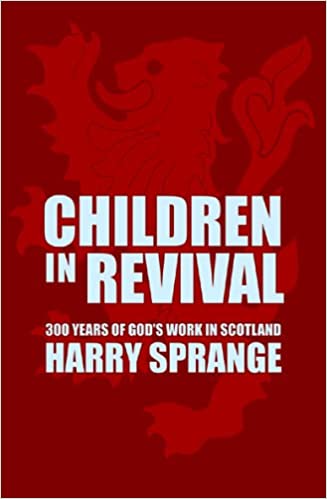 300 years of God’s work in Scotland. Children in Revival tells the stories of children, some as young as four years old, who have been involved in revivals in Scotland over three centuries. Whole communities and indeed nations have been influenced by the power of God at special outpourings of his Spirit.

2. A Century of Societies Various Societies and Movements started in the 1800’s that helped to spread the gospel

3. A Nation on Fire 1859-63 Testimonies of Revival from The Far North to The Borders

5. The Twentieth Century From the pre-war period to the Hebridean awakenings

… an amazing account of accurate and valuable investigation and research. I have wept as I have read, praying that God would again send such an outpouring of his spirit.
Colin Peckham

‘A book that has moved me from the position of believing that “God can” to a point where I realised that “God does”.
Graham Reed, CrossBow Ministries

‘…exciting and inspirational: it relates to what God has done through children in bygone years. May God’s Spirit revisit this generation of children to initiate another revival.’
David Iliffe, Founder and President of Children Worldwide

‘We read of children brought to Christ, … the dramatic changes of life that followed and the impact such conversions had on parents and communities. It is humbling to read of God’s work in this way.’
English Churchman

A historically well-documented account of a work of God among children. Young people were meeting with God, there were personal encounters with Christ… rascals were transformed [and] children were gathering for prayer.
Renewal Magazine

…these youngsters of Scotland heard God’s call and responded in obedience and faith. Children in Revival shows what God can do when we heed the Master’s words and ‘suffer the little ones to come.
Timothy George

Harry Sprange has done us the great service of drawing togethernumerous reports of spiritual revival amongst children ranging across three centuries and virtually every part of Scotland. This book should be read and discussed widely. Above all, however, it should lead us to thanksgiving and prayer.
The Rutherford Journal of Church & Ministry