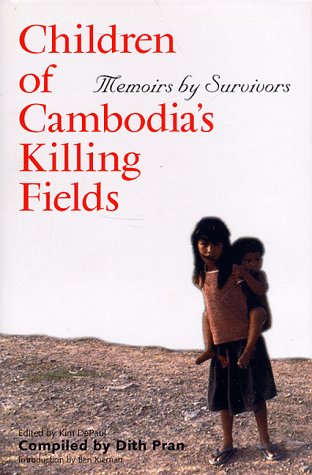 This extraordinary book contains eyewitness accounts of life in Cambodia during Pol Pot’s genocidal Khmer Rouge regime from 1975 to 1979, written by survivors who were children at the time. The memoirs were gathered by Dith Pran, whose own experiences in Cambodia were so graphically portrayed in the film The Killing Fields.

These testimonies bear shattering witness to the slaughter committed by the Khmer Rouge. The contributors-most of whom now live in the United States-report on life in Democratic Kampuchea as seen through children’s eyes. Their photographs accompany their stories. They speak of their bewilderment and pain as Khmer Rouge cadres tore their families apart, subjected them to brainwashing, drove them from their homes to work in forced-labor camps, and executed captives in front of them. Their stories tell of suffering, the loss of innocence, the struggle to survive against all odds, and the ultimate triumph of the human spirit.

Dith Pran is a photojournalist for the New York Times and the founder of the Dith Pran Holocaust Awareness Project. Kim DePaul is executive director of the project.

Ben Kiernan is associate professor of history and director of the Cambodian Genocide Program at Yale University and author of The Pol Pot Regime.

Cover illustration: Cambodian children in front of a Buddhist temple used as a killing field during the Khmer Rouge regime. The temple, in a suburb of Siem Reap, has been dedicated to the memory of the victims of the siege. Photo by Kim DePaul. Cover design concept courtesy of Toni Sabatini.