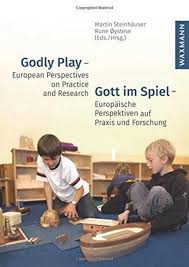 This is a wide-ranging and substantive resource for all who are interested in Christian Education in general, and Godly Play (GP) in particular.  It is a collection of papers from fifty authors most in English and some in German covering a breadth of perspectives, a range of descriptions, a variety of research and analysis, and information on how Godly Play has reached and developed in 17 countries.  The publication came out of a day conference in Riga Latvia, held in September 2016. Prospective readers will be interested to know that it contains a typically open and honest piece by Jerome Berryman, the founder of Godly Play.

Before presenting a review of the book I need to declare a personal interest in the subject matter.  I have been interested in Godly Play for nearly two decades. I first encountered it in practice when Rebecca Nye recounted the story of the lost sheep for me and my colleague Dr John Collier in Trumpington, Cambridge.  Subsequently I have been part of groups where Jerome has retold the same story, first in Houston and then in Princeton.  I have been a regular observer of a Godly Play group in my local church, have Jerome’s books on my shelves, and reviewed his study Children and the Theologians.  I have also advocated and assisted the development of Godly Play in Malaysia.  And I currently supervise a PhD student researching Godly Play. This all means that those looking for an objective review may need to turn elsewhere.

The first section tells how Godly Play has spread in the 17 European countries.  This was not only an eye-opener for me, but something of a revelation.  In the USA and UK Godly Play is mostly associated with the Episcopal and Anglican churches respectively, but in Europe this is, of course, not the case.  Different traditions and denominations have explored and embraced it, including Lutherans, Baptists, the Salvation Army and Scripture Union.  This is significant for any project seeking to develop internationally.  The nature of Godly Play means that it had, and has, to be culturally, theologically and philosophically grounded and contextualised.  Its roots lie in Jerome’s knowledge and experience of Montessori, Cavalletti, Edward Robinson, William James, James Fowler, and Christ Church Cathedral, Houston, among a plethora of other sources and roots.  This does not mean that the practice of GP must to be slavishly followed and replicated (if such a thing were possible), but these foundations need to be understood before it is possible to begin to work out how to express and develop Godly Play in other contexts.

In addition to what is happening in the 17 European countries mentioned, there are indeed shoots emerging across the world and Andrew Sheldon provides a summary of these on pages 121-126.  There is a Godly Play International Council underpinned by an International Covenant of Agreement.  To maintain its integrity Godly Play must articulate its core values and, its essential training curriculum, and recommended practices.  These will be tested and refined as it is welcomed and received in settings and among groups far removed geographically, theologically and culturally from those where it began.  A question that arose for me early on in my relationship with GP was whether it might be applicable to a whole church, not just those of a certain age. And Part D of the book describes how it is already being introduced to older people as well as children with challenging conditions.

Responses to this question will be coloured by how children and adults are defined; what we mean by maturity and being “ready to begin”; how play is regarded; and how church is understood and practiced.  I recall a time in Malaysia when I was asked to lead an all-age congregation in a 1662 Prayer Book service of Holy Communion.  As I knelt at the simple wooden table along with three church elders, surrounded by people of all ages, and contemplated the bread and wine, it was impossible not to see this whole event and process as at the heart of both Godly Play and church.  Just as kindergarten is a concept and practice that relates to all human beings and life, so Godly Play resonates with the whole of church.

The book is focussed on research, with the fundamental question reproduced on the back cover: How is GP to be researched?  The two central sections are devoted to this. It’s a very big question, faced earlier by Rebecca Nye and David Hay in their ground-breaking book, The Spirit of the Child.  Spirituality does not lend itself to quantitative research, and likewise GP.  The article of Jerome sets out some of the challenges, and helpfully there are chapters on theory, methodology and examples of empirical research projects.

Given that this review will be found on the Child Theology Movement website, I would like to concentrate on some of the theological issues that arise in and through this welcome volume.

Jerome Berryman is familiar with both James Loder and James Fowler, both of whom are mentioned in the book (e.g. Fowler, p 134; Loder, p 215).  He also knows that they were in fundamental disagreement about the nature and development of faith (spirituality?).  This difference of opinion is well-known and charted.  But it seems to be the work of Fowler that represents the mainstream of GP.  This is problematic for those who follow Loder’s scepticism about stages of faith.  It could be argued that Loder is the more accurate of the two, both empirically and theologically, and that Godly Play would do well to take seriously Loder’s charge that Fowler is describing something much more akin to psychological or emotional development, rather than faith.  A lot hinges on this, not least an understanding of the logic of the work of God’s Spirit, the love of God, and the grace of the Lord Jesus Christ.  Also, the relevance of Godly Play to people of all ages and abilities.

There is a chapter by Friedrich Schweitzer, titled Children’s Voice and Theology.  He makes a distinction between theology of children; theology with children; and theology for children.  Such typologies can be useful, but the time is surely ripe for Godly Play to engage with the work of the Child Theology Movement.  For nearly twenty years theologians and practitioners worldwide have been seeking to understand the action and teaching of Jesus when he placed a child in the middle of his disciples as a sign both, of the Kingdom of Heaven, and also, entry into it.  What Schweitzer writes is relevant, but there is much more.  Followers of Jesus are duty bound to be child-attentive as they pray that God’s kingdom will come, and His will be done on earth as in heaven. This must mean that they will relate to children appropriately (notably by welcoming or receiving them), but there is adult theology to be done by adults as part of the process. In the final analysis, we are all catechumen.

Schweitzer notes that Berryman suggests seeing children as “sacraments” and a “means of grace”.  This is typically controversial, not least to a Lutheran!  How do children differ from any other human being or type of human in this, one wonders?  Is Jesus leading the way in this by placing a little child in the midst?  Perhaps there is a need to remind ourselves that Montessori and Cavalletti focussed on children and saw in them remarkable qualities and potential, but that at some stage the theology that guides GP will need to wrestle with issues such as Willmer and White in Entry Point.

Dominick Black’s chapter is a theological comparison of GP and Cavalletti’s Catechesis of the Good Shepherd.  The section on biblical theology invites the question of whether the approach described will work for different denominations and theological traditions.  This question is sharpened by the section which discusses Christology.  Black writes: “Berryman insists that the encounter with Jesus, the author of the parables, must remain elusive to be meaningful.  Whilst I have sympathy with Berryman’s insistence on complexity and mystery, in Godly Play the fleshly reality of the Incarnation, death and Resurrection are in danger of being lost.” (p 217)  Later he concludes: “I want to argue that a form of catechesis devoid of future eschatology cannot be said faithfully to represent an orthodox credal Christian language. Children in a Godly Play room are being taught to ‘speak Christian’ without conclusion or full stop (period).” (p 219).

This is fully understandable within a North American Liberal Protestant tradition but begs critical questions for many others.

If one takes GP as a way of shaping and framing space in which children are enabled to experience a Christian language system and so create existential meaning (Berryman, p 131) then it will surely welcome the contributions of a range of biblical and theological traditions.  But most will seek to introduce Jesus Christ as (the elusive) God as accessible in human form, who called us to remember him in the eucharist, and the larger and very ancient story (p 131) as one culminating in the marriage feast towards every eucharist has been pointing.

The story of Godly Play is still unfolding, and for this the church worldwide should be profoundly thankful.