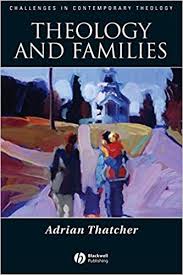 “I am still shocked at the lack of attention this literature (i.e that dealing with family, sexuality and marriage) gives to children…. Given the teaching of Jesus about children, this hiatus is extraordinary… Elsewhere, child neglect is crime.”- Preface ix.
Opening words like these can’t help but catch the attention of anyone committed to the aims of CTM and hungry for further well-prepared food to inform and stimulate our understanding of Christian discipleship with children set by Jesus at its heart, and both the menu and the content of what I found in Adrian Thatcher, ‘Theology and Families’, has not disappointed!
From the outset I found his work clearly and logically presented. Especially helpful is an early, thoroughgoing review, of whole logical development of the book, pp. 21-24, that provides a clear road-map to the journey of theological construction, reflection and application that the author invites us to make with him. In this way topics and discussions that might be of particular interest can be identified and set in the context of his treatment as a whole.
His discussion of the place of children in the theological landscape is appropriately and helpfully prefaced by a discussion of family. He highlights the discontinuity of understanding/meaning/semantic-field of terms like family, marriage and children that exists between the cultures in which the scriptures were written and in Western culture today. Citing Osiek, C. and Balch, D., Families in the New Testament. Louisville, KY: Westminster John Knox Press, 1997, p. 42 he emphasises that children as part of the extended household group and with the potential to contribute to a household`s future wealth and social well-being were “…the family’s most precious possessions. Whether or no they were loved, they were needed.”
The Greco – Roman acceptance of fictive kinship as an extension of family loyalties to others not related by blood, law or other traditional ties, is also highlighted as a further factor distancing the context of the Gospel text from a typically ‘Western’ present. He warns of the dangers that these discontinuities of cultural and temporal distance and of the plurality of voices in scripture present, to even sound scholarship, and highlights the need to be alert to “… partial readings, unproven assumptions, selective omissions and misleading metaphors,” when engaging with the textual material.
In the light of this, Thatcher riley, if quite correctly, makes the statement, “Such discontinuities provide the stuff of much hermeneutical theory!”- p.27. Recognizing the implicit uncertainty that attends even carefully conducted scholarly study, he goes on to affirm that we must discover post-critical hermeneutical compliments to critical analysis and he makes the proposal that a correct hermeneutic should be conditioned by what we know of the character of God as Trinity.
A further topic addressed is the well-founded, if often conveniently overlooked, tension evident in the synoptic Gospels between the relative value of blood kinship, including that between children and parents, over against the loyalties demanded by relationships within the new Kingdom community. He points to a hermeneutical resolution of the tension between the demands of the kingdom community over against the kinship family, by recognizing that the nature of the extended family structure, that was the basic building block of Roman society in the 1st century, was an autocratic hierarchy, driven by self-seeking, status and influence. So, it can be argued that it is this expression of familial relationship that is rejected as being incompatible with the merciful, graceful and inclusive characteristics of the kingdom espoused and demonstrated Jesus. Having presented the argument however he makes the pertinent observation: “Most theologians invoke the historical-critical method at this point, that is, they deal with the relativization of the family by Jesus by relativizing it further and sinking it into its early Mediterranean context. While this might make us more comfortable, the question arises whether it is likely to make us more faithful? A post-critical hermeneutic can still redound (Should this be rebound?) upon its readers with life-changing force.” p.55

After more than 50 pages of albeit stimulating and undeniably relevant discussion of family, I was anxious to get into the section entitled ‘The Teaching of Jesus about Children’, pp.57-63.
Presenting, as he does, a resumé of the synoptic material under the heading of ‘ten teachings’ perhaps inevitably runs the risk of giving the impression that the differing compositions speak with one voice, typically that of Matthew. In fact, the Gospels are three presentations of child-referenced words and events, each set within the context of each evangelist’s overall presentation of Jesus’ life and ministry and the significance that they attach to it and which has been transmitted to us through the hands and minds of centuries of church leaders who have read, accepted and reflected upon its significance for them each in their own time and context. Whilst it would misrepresent the author to say that he was unsensitive to the distinctives of each Gospel, he does not explore in depth the particular nuances and hermeneutical implications of the different presentations of the child-focused passages in Mark, Matthew and especially Luke.
He does, however, I think helpfully, identify a quality termed ‘Childness’, (as distinct from Childlikeness) “…including characteristics of vulnerability, openness, immediacy and neediness…” originated in the writings of Herbert Anderson and Susan Johnson in, Regarding Children: A New Respect for Childhood and Families, Louisville, KY: Westminster John Knox Press, 1995, p.10. ‘Childness’ is defined as offering a description of human quality, particularly evident in children which, “… is fully consistent with the teaching of Jesus, and … helps us to re-appropriate that teaching for ourselves by providing new insights into it,” p.60.
A further, often underplayed, aspect of his exploration of the child-focused teachings found in the Gospels, is the significance he attaches to the statements suggesting and identity or solidarity between Jesus and children and those who welcome or receive them in his name. He discusses the question as to what ontological quality might be attributed to this identity and makes stimulating comparisons between the ‘reality’ of the presence of Jesus as promised to those who receive children and to those who receive the Lord’s Supper. He ends this section with a challenge that sits squarely at the door of CTM:
“When one receives a child, one receives Jesus. And one can expect to receive the ministry of Jesus through the welcomed child. Implications are waiting to be drawn” p.62.

The observations made above are in relation to the first half of the book in which Thatcher constructs the basis for his theology of families. Part II examines the implications of this study for the relationships that comprise family life: “…between spouses and partners; between parents and children; between wider family members; and between families, children and the wider society” p. 113 – the discussion around the concept of the rights of children being particularly relevant. The quality of his treatment of each of these relationships is as thorough, clear and perceptive as that of his theological introduction.

I can hardly recommend this work too highly. For those committed to the elucidation and application of Child Theology, Adrian Thatcher’s Theology of Families, offers substantial and stimulating food for thought. There’s a lot of food served up, but I at least found it well worth the indulgence of extending the normal time allotted to visiting one place of theological nourishment…

About the author: See web page, www.adrianthatcher.org
Adrain Thatcher was Baptist Minister from (1966-74). He currently describes himself as a young 71, and a practising Christian, who feels especially at home in the Reformed Catholic Tradition. “This is why I became an Anglican (Episcopalian) in 1988. I profess the classical Trinitarian faith of the Church, but I interpret this in a positive, progressive and liberal way.” He is visiting Professor in the Department of Theology and Religion at the University of Exeter. He was formerly Professorial Research Fellow at the University of Exeter (2004-2011), and Professor of Applied Theology at the University of St Mark and John, Plymouth (1995-2004). His publications include Redeeming Gender (OUP, 2016), Making Sense of Sex (SPCK, 2012), and God, Sex, and Gender (Wiley Blackwell, 2011).
Of particular interest is the availability on downloadable PDF files of an extensive range of past lectures and articles on family, gender, sexuality and child related issues. For the complete list see: www.http://www.adrianthatcher.org/data/resources/

Of particular relevance to CTM see:

‘Beginning again with Jesus’ (21 pages) This was originally a paper read to a research colloquium hosted by the Catholic University, Leuven, Belgium in 2007. The theme was Theology and Children.
http://www.adrianthatcher.org/data/resources/beginning%20again%20with%20jesus.pdf